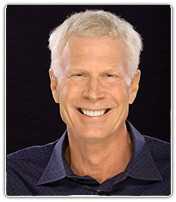 Jim grew up in Kalamazoo, Michigan, in the 1950s and 1960s.He majored in Engineering at the University of Michigan and was named outstanding nonvarsity athlete in his senior year, competing in 16 different sports. A lifelong sportsman, Jim has won state championships in three different sports, and still relishes racquet sports, snow skiing, water skiing, and snowboarding.

At age 23 Jim fell in love with Judy, dropped out of MBA school, and moved to Colorado, where Judy worked as a teacher. For several years he worked at the cutting edge of computer graphics technology at the University of Colorado. At age 29 he founded Precision Visuals, a data visualization software company headquartered in Boulder, Colorado. The company grew rapidly to become a leading worldwide software supplier.

During his mid-thirties Jim spent three years in the Harvard Business School’s Owner-President Management Program, which proved to be a watershed time in his career. His leadership skills blossomed and he was named graduation speaker. This memorable period sparked his interest in both inspirational speaking and being a change agent in the lives of others.

In his late thirties Jim entered his own dark period. He downsized and restructured the company, while navigating bouts of self-doubt and depression. Several loving friends guided him through this difficult gauntlet, and he emerged a more aware, open man. In a sense, his work today with high achievers and their companies is a way of “paying it forward” as a tribute to the men and women who supported him during his own transition.

After selling his company at age 42, he entered a three-year sabbatical period, devoting time to his three young children, while gaining clarity on his own personality, blind spots, natural gifts, and next-stage-of-life mission as an advisor and guide. He was invited to lead YPO forum retreats, which was a perfect match with his gifts as a facilitator, challenger, and whole-life guide. These small-group retreats eventually led to engagements with companies navigating difficult transitions, and with individuals, couples, and families contemplating whole-life transformations.

Today, Jim remains committed to the mental, physical, emotional, and spiritual vibrancy that are the foundation of a life well lived. He meets regularly with a core support group in Colorado, and has multiple accountability partners around the world. He enjoys authentic, enriching relationships with Judy, his family, his friends, the OnCourse Associates, and the people he is privileged to touch in his work.